Categories Menu
Home » ADHD » Chickens Dying From Bird Flu- Is A Virus or Monsanto to Blame?

Chickens Dying From Bird Flu- Is A Virus or Monsanto to Blame?

On May 1st, 2015 Iowa Governor declared a state of emergency after a number of chicken farms were experiencing an outbreak of bird flu, which led to the culling of millions of chickens as a precautionary measure to curb the outbreak.  Naturally, the mainstream media is hyping a possibility of the bird flu virus jumping over and leading to a pandemic for the human population.    Predictably, the same mainstream media is also crying out for the need of a “vaccine” to protect the birds. 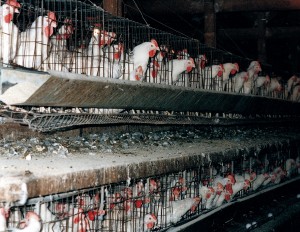 There’s a very important message here that everybody needs to understand.

Noticeably absent from the reporting on the bird flu chicken farm outbreak is a characterization of the farming practices for the conventionally raised chickens, or a report of an outbreak on an organic farm.  The outbreak is clearly occurring on factory farms, where the chickens live in close quarters and are fed non-organic feed that undoubtedly has Monsanto’s RoundUp residue within it (1).  In case you didn’t know, the bulk of genetic modification to crops such as corn and soy (common ingredients in chicken feed) is being done to make these crops tolerant to the herbicide RoundUp.  Mother nature adapts to problems and  the weeds are becoming increasingly tolerant to the poison leading farmers to increase the amount that they spray on their crops.   The end result is more poison per bite of food for all who consumes these RoundUp ready crops, including chickens.

The battle against microbes is a battle of futility.  The number of microorganisms that live in and on our bodies is estimated to be 10 times greater than the number of cells we have. We even know that some of the most “deadly” microbes known to man can be found in and on people without ever causing them problems.(2)(3)  However, under times of stress (biochemical, mental/emotional, structural) the immune system can be degraded to allow these pathogens to become problematic.

Research has clearly demonstrated that the active ingredient within RoundUp, a patented antibiotic and mineral depleting substance called “glyphosate”, can shift the microbial balance within the intestines of poultry to become diminished of health protecting “good” bacteria, and become dominant in health destroying “bad” bacteria.(4)  When you consider that the digestive system accounts for between 70-80% of the immune system, you can begin to appreciate the significance of this finding.  Given that, do you suppose that the chickens, stressed from living in an unnatural setting, and fed an unnatural food source laden with glyphosate residue would be more or less prone to becoming infected with a virus?  How resistant to the virus would other chickens living in close quarters be to the virus that’s being coughed onto them when they too live under the exact same conditions?

There’s no denying at this point that the conventionally raised, genetically modified food supply, which makes up the bulk of the food that millions of Americans are consuming on a daily basis is poisoned with RoundUp.  Preliminary research from “Moms Across America” has demonstrated that glyphosate is bio-accumulating in the systems of many Americans, and the obvious likely source of this is Monsanto’s RoundUp ready crops, such as the corn and soy that bird flu affected chickens were eating. 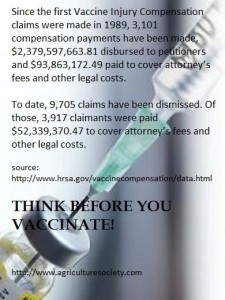 If millions of Americans are consuming RoundUp on a regular basis, and altering their microbial balance to become dominant in pathogenic microbes as is clearly found within virtually all forms of chronic illness, is the solution to the problem really vaccination or does it make more sense to stop poisoning the food supply with substances that unquestionably degrade immune system function?(5)  There is probably no question that is more important to our nations collective health than that right now.  Those who believe that vaccines with their antibody inducing effects should provide an added bonus in fighting off harmful pathogens fail to understand two key points.  One, high antibody counts do not equate to resistance to infection.(6)(7)(8)(9)(10)(11)(12)(13) Two, the ingredients within vaccines increase the toxic load within those injected with them and thus enable the microbial terrain to become more conducive to infections taking hold.  This last point is best illustrated by the analogy of a mosquito problem in an area with a swamp.   If we applied the prevailing medical mentality we have right now to such a mosquito problem, we would be spraying large doses of environmentally destructive insecticide.  In contrast, a holistic line of thinking would try to figure out ways to either drain the swamp, or figure out ways to increase the numbers of mosquito predators in the area.

So, given the problem of Monsanto, should we eliminate the source creating the environment for pathogens to take hold in our bodies, or should we continue to fight the futile battle of waging a war against microbes that will never stop evolving around our “solutions” to their “problems”?   Does it really make sense to further pollute our polluted bodies (14) with injected toxic vaccines(15) that the immune from liability pharmaceutical establishment and government assures us is perfectly “safe” despite the obvious evidence that such an assertion is a dangerous lie?(16)

The battle lines are being drawn.

Fight now, or accept to be poisoned for your shortened chronic illness laden life.  Mandatory adult vaccinations are coming if mandatory child vaccinations are allowed to stand.  We have a golden opportunity here to expose the consequences of mass poisoning of our food supply by roundup and demonstrate the ill effects it is having on us and the chickens.  As our population becomes increasingly sickened by this poisoned food supply we can expect more infectious diseases to emerge that will inevitably bring on the calls for new vaccines by the ignorant masses and the pharmaceutical industry that preys upon this collective brainwashing.

Just as the mainstream media won’t report about something as fundamental to health and disease resistance as diet when it comes to viral outbreaks in chicken populations, don’t expect to be hearing about the diets in those that come down with a “vaccine preventable” disease in the next inevitable outbreak of measles, mumps, etc.