Largest Measles Outbreak in North America Hit Quebec in 2011, where ~ 97% were “Fully Vaccinated”.

Don’t expect to hear the mainstream media discussing this, as it exposes the failure of the vaccination policy that they love to support.  Certainly, they never like to talk about how measles was disappearing prior to the introduction of the vaccine, nor do they like to discuss how the public perception of measles was prior to the vaccine propaganda kicked into high gear thanks to the total immunity that is given to vaccine manufacturers here in the United States. 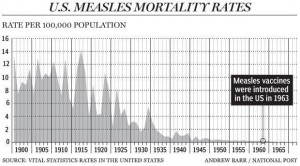