In depth:
It’s estimated that 50 million Americans are suffering from autoimmune disorders.  You may have heard their names – Type 1 diabetes, crohn’s disease, multiple sclerosis, rheumatoid arthritis, scleroderma, psoriasis,etc.  It’s a popular group of diseases that is on the rise, and unfortunately the medical community predominantly acts as if it’s a total mystery to be treated with immune suppressing drugs and steroids.  While it may be true that understanding every nuance of every autoimmune disease is not known, what does appear to be clear is a common thread tying virtually every autoimmune disorder together.   In my 10 years of practice, everybody I’ve seen that has had an autoimmune condition, had a gut issue underlying the disorder.  If you want to understand how the gut, infection, and autoimmunity all interrelate and what can be done to prevent or even reverse the disorder, read on…

The gut is an approximately 30 foot long tube which runs through the interior of your body, from mouth to anus in different shapes and functions.  The gut is in fact a wall between the outside world and your inner workings.  In other words, it is essentially a “fence” between your blood and an assortment of trillions of microbes within the gut  – some beneficial and some harmful.  The function of the gut is diverse from maintaining proper hormone function, balanced mood, to being between 60-70% of the immune system, and, of course, breaking down food to provide our cells with the nutrition needed to function.

In order to move forward, consider this important analogy.  When a dam that begins to crack due to the flooding of water increasing the force upon the structure of its walls, it is far less important paying attention to where the cracks show up than it is to the force behind the cracks.  Likewise, when dealing with a health complaint, in this case, any number of autoimmune conditions, it’s more important to pay attention to the factors that created the problem than the name given to the so-called “incurable” disease.  If you pay attention to the forces contributing to your chronic illness/autoimmunity, and address those forces rather the “cracks” which are symptoms, you’ll likely find success in healing your health challenge.  One of the primary forces to virtually every chronic illness arises from the gut.

What evidence is th 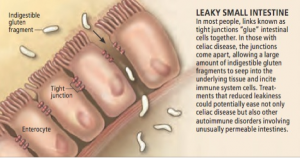 ere that autoimmunity is related to the gut?

Note:  If you are to dig into the studies connecting the gut with autoimmune conditions, you will continually see reference to “tight-junctions”, which act as gates between the inner portion of the gut and into the blood stream of the body.  These gates are meant to be tightly regulated, and if compromised (leaky gut) what was behind the gates can move into areas where it may not belong.

Below are excerpts from some studies…

“The leaking gut syndrome…  is associated with …type 1 diabetes. Furthermore, treatment of the leakiness has been reported to modulate development of autoimmune diabetes in animal models suggesting that intestinal environment plays a key role in the destruction of insulin-producing beta-cells in the pancreas.”(1)

“The ‘leaky gut’ hypothesis is advanced which proposes that a preexisting disorder of intestinal permeability is responsible for the intestinal inflammation of Crohn’s disease.”(2)

“A growing body of evidence in animal models of MS implicates the gut microbiota in the induction of central nervous system (CNS) autoimmunity.”(3)

“Our results therefore support the hypothesis that increased gut permeability could play a role in the pathogenesis of IgA-associated nephropathies.”(5) (nephropathies represent one of the manifestations of lupus.)

“Baseline permeability is altered in LSS (an expression of scleroderma); the exaggerated response of the small intestine to ASA may represent a genetically determined or a disease-related dysfunction of the mucosal barrier.”(6)

“This indicates a persistent or primary defect of intestinal permeability in these patients (Celiac) and confirms previous in-vitro results.”(7)

You probably notice a pattern, but if you want more detail on the link between autoimmunity and the gut, these two excellent studies go into great detail on the connections (8), (9).

So, how does the “leaky gut” feed into autoimmunity?

From a clinical standpoint it appears that a combination of poor diet, gut flora imbalances, and toxins (microbial,dental, food, water), and genetics creates a situation where microbes migrate through the compromised barrier and find their way to whatever the weak link is within the body.  From a research standpoint, it appears this theory is correct.

There is evidence to show that the microbes from the gut are associated with both Ankylosing Spondylitis and Rheumatoid Arthritis, which indicates that the microbes migrated from the gut into the circulatory system and found homes in connective tissue. If you do some searching you’ll find evidence associated with infections in MS(10)(11), celiac(12), and lupus (13).  How might these pathogens get into the tissues and trigger autoimmune responses?  Impairment of the gut lining is clearly one way.

The gut lining (tight junctions) become impaired.  These junctions allow undesirable microbes, toxins, to migrate across the damaged lining.  These microbes, or toxins find homes in tissues that are weakened for a variety of reasons (genetic, nutrient status, stress, etc).  The immune system, as it tries to eradicate the pathogen may “tag” the tissue as being a problem which leads to the tissue destruction.  Whatever tissue has been tagged and attacked determines the particular flavor of autoimmune disease it is named.  Given the fact that a number of people with RA have successfully been treated with antibiotics, it’s reasonable to conclude that the attack may stop if the pathogen is eradicated (14).

So everybody take antibiotics to treat autoimmunity?  No.  Antibiotics are responsible for much of the problems associated with leaky gut, from the animals we eat that are forced to take them, to the over prescription of the drugs for various illnesses.  Antibiotics disrupt normal gut ecology, leading towards a dominance of pathogenic microbes known to harm the gut.

Regardless, it’s clear that autoimmunity is reversible.  As indicated in this study, “This new theory implies that, once the autoimmune process is activated, it is not self-perpetuating; rather, it can be modulated or even reversed…. As tight junction dysfunction allows this interaction, new therapeutic strategies aimed at re-establishing the intestinal barrier function offer innovative, unexplored approaches for the treatment of these devastating diseases.”(15)

So, there you have it – autoimmune disorders are reversible, but you better pay attention to the gut if you have any hope of “curing” the dreadful autoimmune conditions.

A few other factors that may contribute to autoimmunity, which may or may not directly affect the gut:

2.)  Dental issues- Some dental materials, and root canals may also be a source of autoimmune disorders (22)(23).

3.)  Studies show that women are more likely to develop an autoimmune condition than men, which points to hormonal influences of the multiple diseases.  Women have more estrogen than men.  I would theorize that it’s estrogen dominance (a favorite of candida) which creates an environment conducive to gut permeability issues (24).  More candida = more gut hyperpermeability = potential autoimmune disorders.

1)  Optimize diet/digestion.  Eliminate problem foods, especially grains, sugar, and food additives.  A paleo like anti-inflammatory diet is generally the best strategy, as it will not only eliminate most of the offending foods, it will also help to stabilize blood sugar.  Plant based digestive enzymes along with the use of betaine HCL can go a long way towards ensuring food is properly broken down.

2)  Measure living space for electromagnetic smog, and mold toxicity as both can disrupt the immune system and perpetuate an illness.  (I provide patients with an RF, ELF, and a dirty electricity meter to measure their homes with.)  Mold testing is done with the aid of www.immunolytics.com.  If living space is overly toxic, it may be necessary to move.

3)  Cleanse the bowels.  Increased bowel toxicity puts stress on all organs, particularly the liver and kidneys.  Utilizing magnesium peroxide and possibly colonics can help take much of the toxic stress off the colon and other organs of elimination.  Magnesium peroxide provides magnesium and can increase oxygen levels as well.

4)  Eradicate pathogenic microbes.  Utilizing specific herbs, as revealed through bioenergetic assessment, in addition to energetic therapies such as biomagnetism and NMT can go a long way towards recovery.   Leaky gut can make people highly sensitive to anything they put in their body,  so sometimes antimicrobial supplementation can be a challenge which is overcome using energetic therapies to achieve the same goal.  If chronic viral infections are in play, a combination of biomagnetism, a low aginine diet, L Lysine, and possibly Isopathic remedies may need to be used.