How I discovered biomagnetic healing:

In 2008, I had a patient who was suffering from an amoeba infection which was at the root of chronic back pain.  The colon has a relationship to pelvic stabilizing muscles, such as the hamstrings, tensor fascia lata, and the quadratus lumborum.  When the colon is stressed, these muscles will not contract properly and will result in structural instability in the pelvis, setting the stage for back pain.

Over the course of four months, we had tried a number of herbal remedies, in addition to two different rounds of prescription medications to eradicate the problem.   Each time, the infection would improve, bringing her more stability in the back, but once the medications or herbs were stopped, the parasites soon returned along with an increase in back pain.   This was certainly an atypical situation.  I was out of answers for her, and advised her to seek out another practitioner.  She returned three weeks later having had two sessions with a biomagentism practitioner, and felt like the problem was finally gone.   Follow up testing confirmed that she was correct.  Having witnessed such dramatic results in two sessions meant I needed to learn the technique.

Living beings maintain their systems, organs and tissue in an amazing energetic equilibrium. Every second, billions of reactions and biochemical exchanges occur in the organism, allowing it to maintain its complex network of cells and tissues in balance. 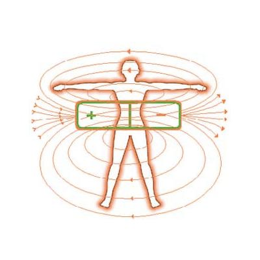 Cells need the appropriate environment to be able to live and correctly carry out their multiple functions. The ionic balance of positive and negative charges present in the cells and their environment plays an essential role in guaranteeing this suitable cellular climate.

Just like the healthy human organism has a temperature of between 36 and 37 degrees Celsius, its pH level, or grade of internal acidity, should remain in a range of neutrality close to the value 7. Pathogenic phenomena are tolerated when there are fundamental distortions in the pH level.

The process of pH imbalance begins at the cellular level with the exchange of ions through the membrane. This bioelectric act occurs in all the cells of the body. If we take a blood sample, we eliminate the fluid until we have only the red blood cells left, and we apply a magnet, we can see in the microscope how the cells turn and point in one direction. The magnet polarizes the cells’ ions.

The magnetic south pole provides a positive charge of energy (+), accelerates cellular activity, strengthens the acidic components, stimulates the production of proteins and speeds up the maturing process. The north pole, on the other hand, provides a negative energetic charge (-), reduces the velocity of cellular activity, increases the alkaline level, sooths pain, and reduces the concentration of hydrogen ions. Magnetism therefore, influences the hydrogen ion of water, which has decisive effects on health (it is not in vain that we are made up of 70% or more of water).

Disease or dysfunction in a part of the body is related to a distortion in the pH level. If we correct the ionic alteration through the help of magnets, the problem will tend to disappear. The organism will return to the point of equilibrium and the body’s fantastic ability to regenerate will restore its own health.

Almost all pathologies have their own Biomagnetic Pairs, magnetic fields that produce themselves with their north and south poles in specific parts of the body. 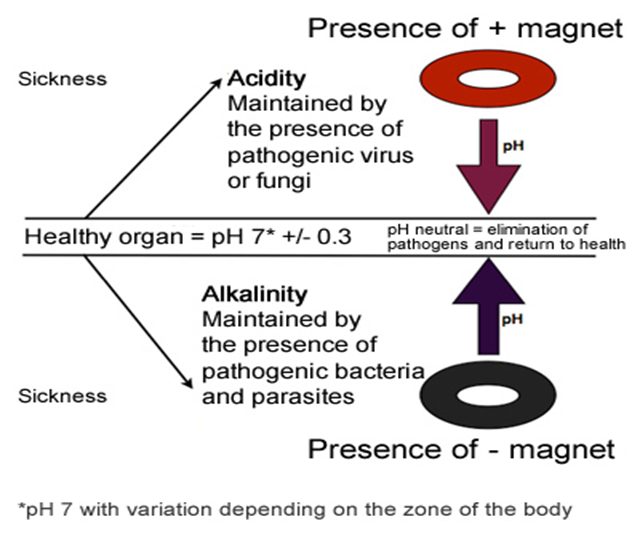 The location in the organism of these biomagnetic pairs is today already defined, thanks to the tireless work of Dr. Isaac Goiz throughout the past twenty years. He has identified, by pathogenetic codes, more than 250 biomagnetic pairs that correspond to the majority of diseases, ailments, dysfunctions, and syndromes. Common diseases are generally produced by only one Biomagnetic Pair, while complex illnesses and tumor processes are the result of associations between two or more pairs.

Energetic disruptions manifesting as disease or dysfunction can be treated by applying magnets to the corresponding poles. Through magnetic induction, these magnets oppose a charge with its opposite polarity and cause the charges to cancel each other out, restoring the natural pH balance in the affected organs. The pathogenic microorganisms disappear when the environment upon which their implantation, metabolism and reproduction depend is taken away. In this way, organ function in sick people is reestablished and the body is able to cure and regenerate itself, as long as the organ or the tissue has not reached the irreversible limit of the degenerative process.

For example, If a patient has contracted a viral or bacterial infection, the therapist will check the patient’s body to detect which concrete pair or pairs are polarized as a result of the infection. The pairs that come up reflect the internal pH imbalance in a specific area of the patient’s body, an imbalance that is related to his illness. Pairs of magnets correctly placed can facilitate the migration of H+ ions and free radicals from one area to another, in this way modifying the pH level in that area. Therefore, after detecting the pairs that the patient exhibits, applying biomagnetism will impact them and depolarize them with strategically-placed magnets, reestablishing and re-equalizing the patient’s internal pH level. From this moment on, the pathogenic viruses lose their genetic information and the bacteria lose their alkaline environment needed by their metabolism to reproduce themselves.

*This service is provided only to members of the PMA.