What is Applied Kinesiology?

Applied Kinesiology (AK) is a system that evaluates structural, chemical and mental aspects of health using manual muscle testing with other standard methods of diagnosis.

AK has provided practitioners (DC’s, DM’s, DO’s, MD’s, DDS’s,PSc.D’s, acupuncturists) with a useful tool in understanding the holistic connections within the mind-body, and has provided insight into the subtle interconnections between organ/gland function to muscles.  In short, the body organizes itself in circuits (acupuncture meridians), and when an organ (which is a master switch on the circuit) is impaired in function, there will be a manifestation in muscle imbalance (weakness) within the body.

For example, say the kidneys are being stressed due to toxic accumulation of a heavy metal that will manifest as a weakness within a kidney related muscle (psoas).  (This may occur well before conventional lab tests may indicate this problem.)  What may be felt symptomatically is back pain, due to the relationship between the kidney’s and the lumbar spine supporting psoas muscles. 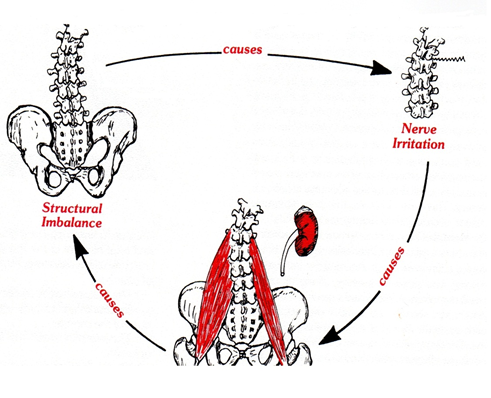 relationship that is at the root of many apparently structural complaints that respond poorly to straight chiropractic or physical therapy approaches.  Have you ever heard of someone seeing a chiropractor or PT once or twice a week for over a year, or longer, and not seem to resolve their low back pain problem?  There’s a good chance the problem didn’t have a structural origin in such cases.

The Triad of Health 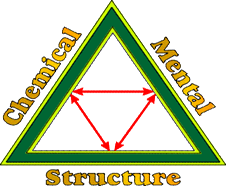 el for ideal health is seen by viewing a perfectly balanced triangle.   When someone is healthy, they have a perfect balance between mental/emotional, biochemical/nutritional, and structural aspects of their mind-body.

If one side of a triangle becomes out of balance, so do the other sides.   Likewise, a structural imbalance in the neck can alter neurological communication to an organ, like the stomach, which may lead to improper acid production in the organ, and a resulting overgrowth of harmful microorganisms within the small and large intestines.   A more common reaction of mental affecting chemical and structural, would be

receiving news of an unexpected death.  The shock of such news can make one sick to their stomach (mental affecting chemical), and such mental tension can translate into tight muscles around the neck, causing a “stiff neck”.  The reality is that these interconnections between the mental, structural, chemical aspects of the mind-body occur well before they become obviously symptomatic.

Medical doctors are trained at treating disease, but there is much dysfunction that occurs before the body has reached a diseased state.  This explains why someone can feel poorly and have a thorough examination by a medical doctor, only to be told nothing is wrong.  In reality, something is clearly wrong with the patient, but the diagnostic tools used by the medical doctor may not be sensitive enough to pick up dysfunction before it reaches a disease state.  Ideally, treatment begins to prevent dysfunction degrading to a disease state.  If the problem is heavy metals affecting the kidneys (example above), which in turn weakens the psoas, which in turn causes instability in the spine, which in turn causes pinching of a nerve in the lumbar spine, then a proper approach would be to identify the source of the metal poisoning, and secondly to realign the structure to eliminate the pain.  Combining both in this scenario will provide the best path towards wellness for the patient.  A good AK assessment can help properly identify this causal chain of events, and also specifically identify remedies most appropriate for that individual to help eliminate the toxin and repair the tissue.

Over time, practitioners of AK have created many off-shoots that built

upon this information in one way or another.   None of them replace conventional testing, but each one can provide insight and non-invasive clues to a skilled practitioner as to underlying factors in health complaints that may or may not show up via conventional testing.  Further, some of them, such as Chiro + Kinesiology (CPK), Neuro-Emotional Technique (NET) and NeuroModulation Technique (NMT) can provide considerable insight into all aspects of the mind-body including the subtle energetic disruptions which are overlooked in conventional diagnostics, and many alternative systems.  NMT is both an assessment and treatment modality, whereas AK, CPK, and NET are more assessment oriented, but such assessment may reveal what treatment is most appropriate, i.e. (nutrition, massage, meridian therapy, etc.).

Dental cavitation’s are pockets of gangrene occurring in the mandible or maxilla.  They commonly occur where teeth have been extracted, or beneath root canals.  The toxins released by the cavitation’s are highly toxic and can contribute to, or cause, a number of health complaints.  A trial study has demonstrated a success rate of using NMT to treat dental cavitations exceeding that of surgery.

If NMT can facilitate the healing of something as toxic as gangrene, it’s safe to say the applications of its utility in healing are broad, and based on testimonials of patients, you can see they are.

It is highly recommended that you take some time to view this interview below with Les Feinberg, DC, who developed NMT, to gain a better understanding of this form of energetic medicine. Those who have studied Dr. Feinberg’s Neuro-Modulation Technique, quickly realize that this contribution to medicine will one day stand as one of medicine’s greatest advancements ever!

“Dear Dr. Buckley,
I just wanted to thank you for your help in resolving a health problem I had been battling for over 19 months. Around November 2003, I developed a lump on my eyelid. I originally thought it was an ingrown eyelash or a stye and tried over the counter treatments and heat compresses. I kept hoping that it would go away and that it just needed time to disappear. I began to feel self conscious of it, as it fluctuated in size and just would not go away entirely. Around June 2004, I visited a dermatologist who classified it as a swollen gland. He recommended OCuSOFT eyelid scrubs and that if it did not go away in one month, he advised I should go to an ophthalmologist and have my eyelid flipped over and they could just cut it out, which horrified me. The eyelid scrubs did help, but the size continued to fluctuate, and it never went away. Over the next 6 months or so, it continued to shrink and then get even bigger and more noticeable.

I first came to visit you on June 1, 2005. You were able to pin point exactly what was happening with my body and identify foods that I was having allergic reactions to and vitamins that I was lacking. I was able to know what to avoid and how to help myself heal. By the beginning of July the bump was almost unnoticeable, and by the middle of July it was completely gone!

I am forever grateful of your help and understanding with the problem. I will continue to recommend you to anyone I come across that needs help in finding the right path to heal any illness or health problem!! I sincerely thank you!” Valerie Rossman | Austin, TX